A rich and proud history

In early 1980 a group of enlightened educationalists and visionaries identified the urgent need to provide quality secondary education for the black children in South Africa.  This vision was translated into the formation of the New Era Schools Trust (NEST) on 6 April 1981.   Illustrated below is an extract of the minutes of their initial meeting. 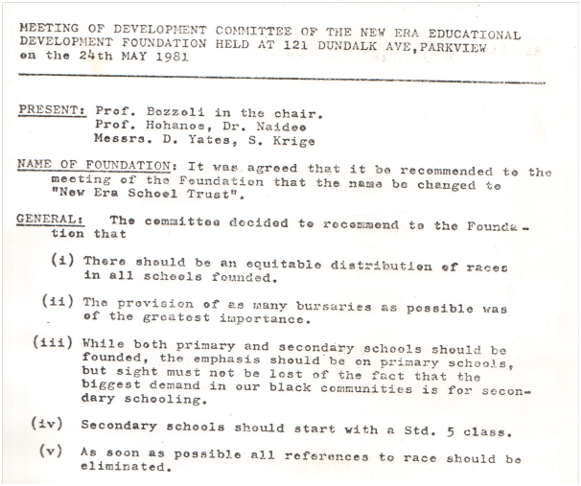 The objective of the Trust was to establish quality schools, which were not aligned to any one faith and where children of both genders and all racial groups could study and live together as boarders.  The “New Era” was in anticipation of a democratic, non-racial South Africa.

Three schools were established.  One each in Kwazulu Natal, Western Cape and Gauteng.  The school in Gauteng was north of Fourways and opened in 1989 as Phuthing College.  Its formation was generously supported by Johannesburg Consolidated Investments and Barloworld.

Phuthing College developed very well and ultimately provided non-racial, non-faith aligned education from grade 000 to 12.  A marketing decision was taken to change the name of the school to Summit College.

Summit College was sold at the end of 2015, closing a 25 year chapter of owning and operating a school, but freeing the Summit Educational Trust to return to our core purpose ofmaking a difference in education, mainly through financial assistance.